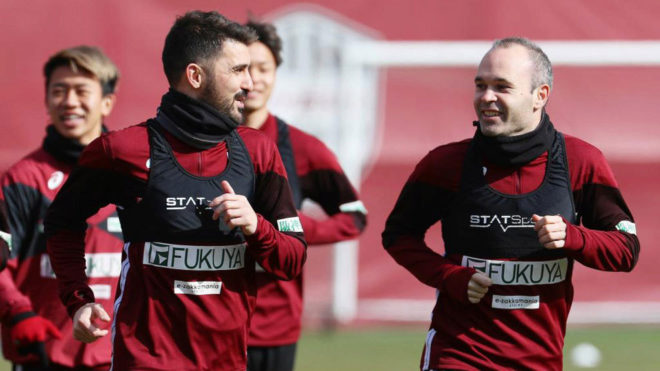 David Villa spoke of his delight at being reunited with his former Barcelona teammate Andres Iniesta after joining Japanese outfit Vissel Kobe.

With Iniesta, Villa enjoyed a wealth of success for both Barcelona and the Spanish national team, winning just about every trophy possible, including the Champions League and the World Cup.

The 37-year-old striker, after completing his first training session with his new colleagues, made no secret of his joy to be back alongside Iniesta.

“Everything is so much easier when you have a player like Andres behind you,” he said.

“I am delighted to be back alongside him.

“Andres is the player who gave me the most joy on a football pitch, thanks to his goal,” Villa mentioned, in reference to Iniesta’s World Cup winning strike against the Netherlands in 2010.

Villa will also be alongside another world champion, with German striker Lukas Podolski among the ranks at Vissel Kobe.

The trio posed for a photo together after Villa‘s first training session.

Vissel Kobe begin the new season on 22 February against Cerezo Osaka who are coached by Basque manager Miguel Angel Lotina.